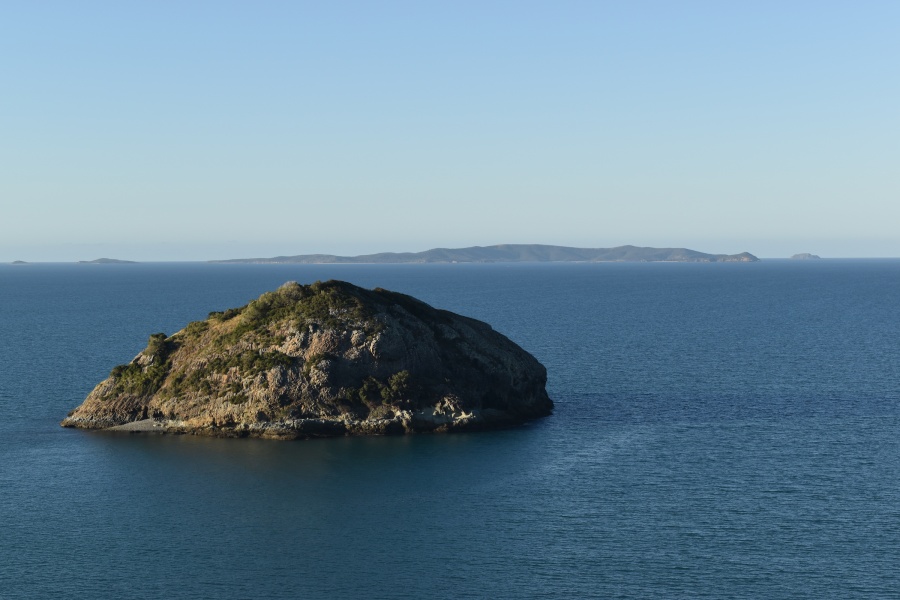 For our fourth day based in Yeppoon we decided to stay closer to ‘home’. In the morning we took a ten minute drive up to nearby Lammermoor so we could do some walking in their Native gardens. On their information board they showed seven possible walking zones on multiple trails. We parked at the Lioness Park (point B) and after crossing the Scenic Highway entered the native garden near point A on this map.

First up we followed the trail through the paperbark wetland area, continued on up to the Poplar Gum woodland area

before following another path back down to an intersection with the Lammermoor Creek trail. Here we headed towards the main road. After crossing the road we had a good view of the beach to the south.

From there we walked along the Secondary Dune trail which eventually joined onto the Beach Scrub trail.

At the end of that we ended up walking along a couple of streets until we came back to the beach. After a short walk along the beach we arrived back at our car and drove back to the caravan for a well earned drink and lunch. Given the weather we put on a load of washing and hung it out when it was finished. This still gave us time to do another walk so we drove down to Bluff Point which is an area of the Capricorn Coast National Park. Here you can do a circuit walk of just under 2.5 kms.

Having said that, it isn’t a flat circuit as you can see from the next photo.

As with many walks though, the view was worth the walk. To the north we had views of Roslyn Bay.

Out to the east we had Bluff Rock in close but the Keppel group of islands further out.

We continued the walk through grasslands.

This brought us to the south side of the circuit and now we could see back down to Mulambin Beach and where we were staying.

Next stop for 5 nights- Kinka Beach on the Capricorn Coast. Island View Caravan Park is right opposite this wide beach. Great for walks. Yes wonderful island views too.
Heading further north. We crossed the Tropic of Capricorn line as we passed through Rockhampton on our way to the Capricorn Coast.
Tannum Sands sunrise, delayed by a thick band of cloud on the horizon but worth waiting for I think.
What’s this?
It’s amazing how plants adapt. Despite strong winds and it’s roots in sea water this small tree is going well.
The section of the beautiful beach at Tannum Sands that is a leash free area for dogs.
Back on the road again. We travelled from Hervey Bay up to Tannum Sands. Saw some nice countryside along with the ever present road works on the Bruce Highway.
Winter time in Hervey Bay is humpback whale watching season. What an amazing afternoon’s whale watching with Whalesong.
Hervey Bay views whilst walking Mel.
So lucky to see a platypus in the wild at Breeze Big4 Carnarvon Gorge. Had sighted it at night a few times but light was too poor to video. So on our last morning we headed down to the creek early and got lucky.
Another short video taken at Boolimba Bluff at Carnarvon Gorge. Yesterday’s view was across the gorge. This one is looking down into the gorge.
Carnarvon Gorge. Great views. Hope you agree.
As you can see it was well worth the effort to do the Boolimba Bluff walk at Carnarvon Gorge. Great views. Set the camera on timer for the second last shot but the lighting wasn’t ideal.
Here’s the next section of the hike to Boolimba Bluff walk at Carnarvon Gorge. It was a lot of fun and an enjoyable challenge. (More to come)
An early start but not in the dark as suggested. This is the start of the Boolimba Bluff walk at Carnarvon Gorge. (More to come)
Here’s the second part of adventure up the Warrumbah Creek in Carnarvon Gorge NP.
Here’s a few shots from the walk on the second side of this area, Warrumbah Creek Gorge. Pleased we did a bit more exploring after the main track ended.
Another day, another short walk or two in Carnarvon Gorge National Park. This one is to and along Mickey Creek.
Our final diversion for the day in Carnarvon Gorge was to the Moss Garden. 650metres each way. Water seeping down rocks covered in mosses, ferns and various other small plants of every shade of green imaginable. It was a lovely place to stop for a very late lunch.
Next featured offshoot from the main trail at Carnarvon Gorge was the Amphitheatre. Lots of variety on the way in. It was like a huge cave with a hole at the top. Best of all no one else was in there whilst we sat and enjoyed the serenity.