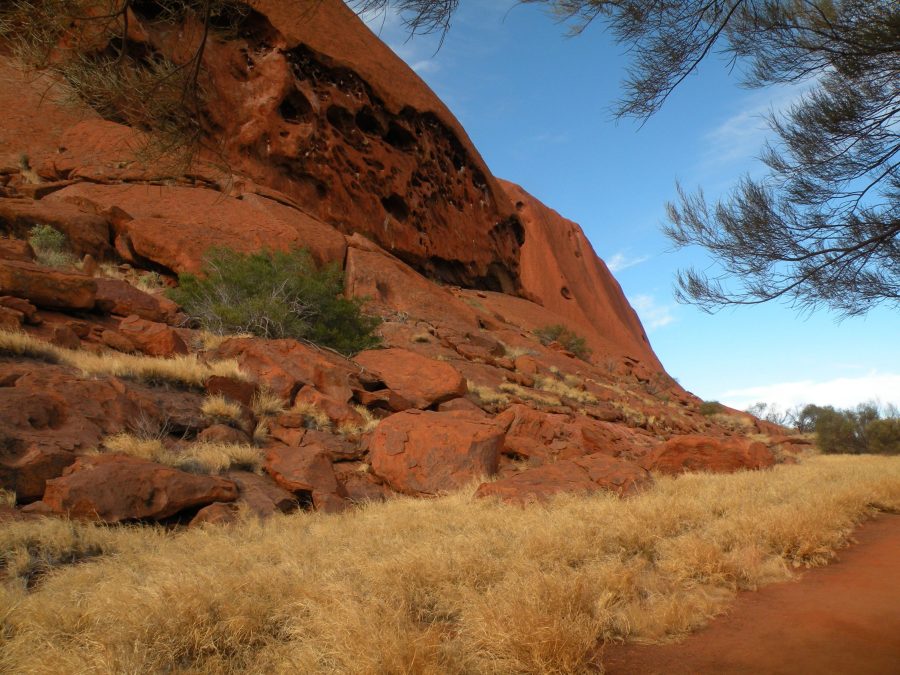 Day 10 – May 31 Uluru Mala guided walk and base walk
A later and more leisurely start to the last day of Autumn meant we could take our time over breakfast and preparing some lunch to take with us. By 9:40 we were out at the Mala car park at Uluru. In readiness for the 10:00 Mala guided ranger walk we left the warmth of the car and instantly regretted it. The temperature was an icy 5 degrees or so and the wind was biting through three layers of clothing including a down jacket.

Of note is the fact that this is the area where in previously less enlightened days climbers set off for the top of Uluru. Nowadays they are greatly discouraged and by the end of the year it will be outlawed completely. In behind the signs and up higher we could see the railings that helped climbers previously. 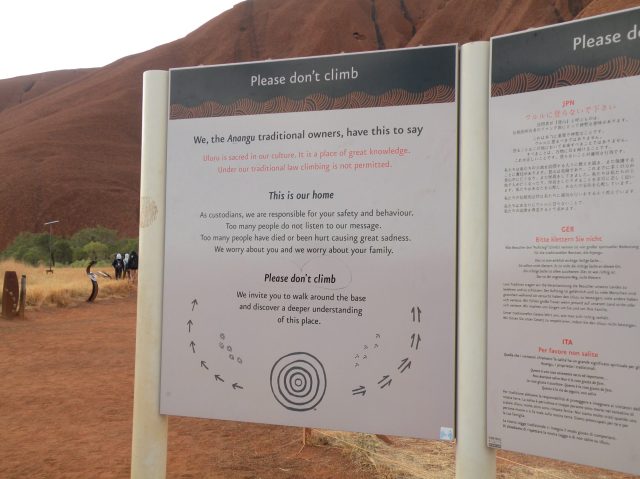 As it was signs said the climb was closed due to high winds which were still biting into us as we waited. Just on 10:00 two rangers arrived and one of them introduced himself to us as our guide for the day. His name was James and he was assisted by another guy. Interestingly the young guy we’d met the day before who was working on an HR project to look into indigenous employment at Uluru was there too. He also was named James – confusing possibly. A large group set off along the walk.

Our first stop was at a cave which has links back to the creation story told by the aborigines in this area. The story centred around a woman blind mole building a shelter in the area.

James also talked about the vegetation in this area and how the indigenous people are able to live off the land through gathering and hunting.

Next stop linked to this as it was a kitchen cave with a wave lip to it.

A couple of the stops were at sacred sites, some for men and some for women. James pointed out signage describing the area as ‘sensitive’ and asking visitors not to take photos in these clearly signed areas as a respectful thing to do.

The walk continued up to the Kantju Gorge and its waterhole.

Here James answered questions of a more general nature about the setting up of Uluru as a National Park and the role of indigenous and other people in the park and ancillary tourist industry. It was all very interesting. Sadly numbers of indigenous people employed in the area has fallen below 50% of the workforce. This was an area that the other James was studying and hoping to improve.

By now it was after 11:30. As the group broke up to go their separate ways we started off to do the base walk of Uluru. A number of others did too. The early sections were classified as sensitive so I have taken no photos to show you. Annoyingly we noticed people along the way taking photos in these areas. At one spot we spoke to people and explained and they stopped. They hadn’t been on the guided walk but really there was no excuse, all they had to do was read the signs! So here is the first area where we could take photos. You can see the path was mostly flat and gravel and that an area had been recently back-burned. Also there are many more eroded pick marks on Uluru than I realised.

After a while we could see an area high up that James had described as like a brain.

We continued on until we came to a shelter and radio/first aid point where we sat and ate lunch. Our mascot, Kirby, rested here too! 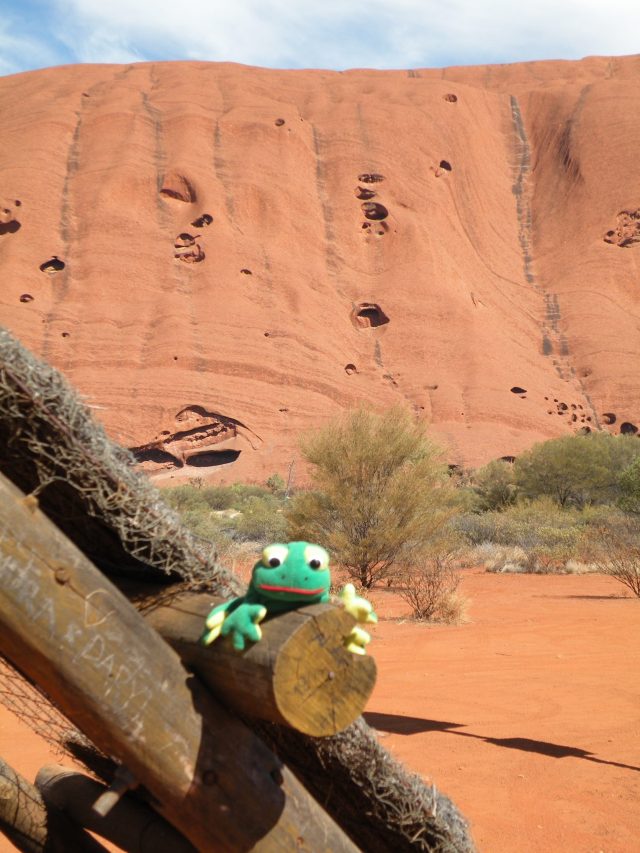 As we continued we noticed we were coming to a pointy end to Uluru. There was quite a lot of vegetation here.

In fact we even noticed one plant in flower.

Beneath the pointy end was another sensitive area so the next photos are further on. This section was on the shady side of Uluru at this time of the day.

Another ten minutes on we came to this interesting looking open cave.

This split rock sat beneath it.

Having not seen a lot of flowers in bloom we easily spotted the seed pods on this plant. We suspect it is an Eremophila but not sure which one.

I also was intrigued by a number of plants which appeared to have a mistletoe growing in them like this one.

The seeds on the sedge grasses made for an interesting photo too.

Just before we came to the Mutitjulu waterhole we passed this wave wall in the rock.

We diverted into the waterhole 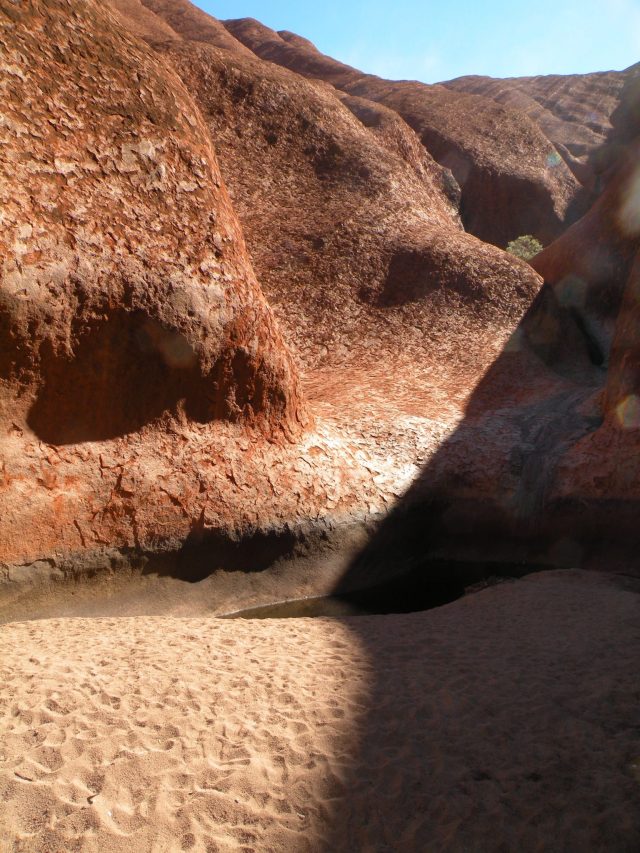 and the rock paintings in a nearby cave more appealing.

The remaining two or so kilometres was quite interesting with a variety of rock formations, 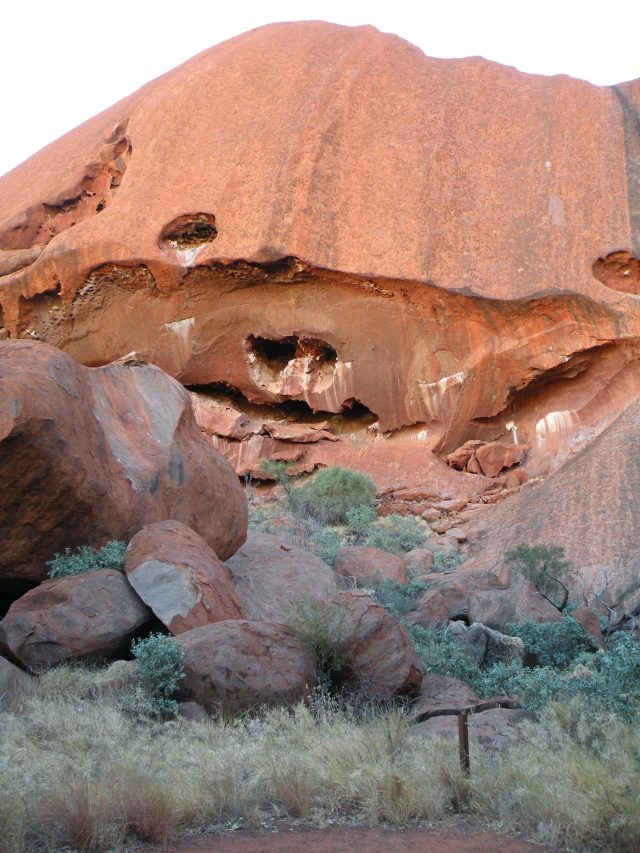 A wagtail on a sign just asking to be photographed

and another plant in bloom, albeit diminutive bloom.

Finally the path turned the bend

and we could see the old path up Uluru that climbers had formerly taken up above us. 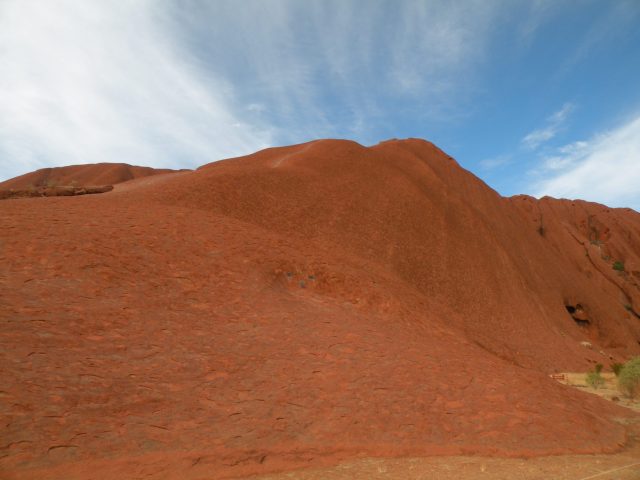 It had been quite a walk, just over 10 and a half kilometres and like Kirby, our mascot, we were happy to sit down for one last look.

2 thoughts on “Uluru – Mala guided walk and Uluru base walk”